It’s embarrassing, really. Here we are with one of the largest retail companies ever conceived by man. A place where from your internet-connected device you can order anything from books, electronics,  to mincemeat, to fifty-gallon drums of personal lubricant. You can also buy just about any album in physical form whether it be brand-new or something long out of print. It’s the Sears Roebuck of my generation, and it’s done a pretty good job to that effect.

Naturally, as any online retailer does, Amazon tries to branch out into the digital distribution realm. They’ve done okay on the video side of things with a decent offering for Prime subscribers. Software purchases are also very smooth, with many games even working with Steam out of the box. Music streaming, however, is where Amazon fails miserably. And they fail in a way that a company known for innovation really shouldn’t.

Amazon recently introduced their revamped Amazon Music service, boasting millions upon millions of songs available on all of your devices. As a guy who has jumped from one streaming service to another, I was hopelessly intrigued. The size of a service’s library isn’t much of a selling point these days since most services now have similar catalogs and most of those services have ways to mesh your personal library with theirs.

I thought that Amazon Music would grant me that same luxury. I had used their previous iteration of streaming service in the past, which was then less miserable. It allowed me to sync my library with Amazon’s. The issue? Hundreds of duplicate items in all of my playlists. A pure clusterfuck. I then went to Google Music with little to no fuss. With the new Amazon Music, the duplicate issue didn’t seem to appear, since you now have to pay a new yearly fee to have your library synced. On top of my Prime subscription, I’d have to pay an extra $25 a year to store my songs, even though I already have an amount of cloud storage that could accommodate it.

The abysmal desktop application did not help my understanding of this fact. In my attempts to sync my library, no progress notifications were provided. The user interface twitched, brightened, and faded with each tiny movement of the mouse. It crashed a couple of times. My first few attempts to log in were unsuccessful. Downloading and uploading playlists was a frustrating experience.

This isn’t how Amazon usually does things. They usually work on a project obsessively until it’s to their satisfaction. Amazon Echo is a perfect example of what they can do right.  So what the hell is wrong with Amazon Music? I think they believe that a vast library will solve all of their problems. It won’t if it sucks to interact with that library. In my many and almost obsessive jumps across streaming platforms, the one that always gets my repeat business is Spotify – because the software is good! It treats my personal library not as an afterthought, but almost as a friend. It’s seamless. Google Play does a similarly good job. It’s infuriating that Amazon can’t equal this with all of their resources and built-in userbase in their Prime customers.

Here’s what they could do. Go ahead and charge Prime customers for the actual streaming service. Don’t further nickel-and-dime them for storing their music. Go ahead and charge the non-prime folks for that. Make desktop and mobile applications that actually work. I’m pretty sure that most of the population of the Seattle-Tacoma area are Amazon developers, so use ’em.

In the meantime, stick with Google Play or Spotify, ’cause Amazon Music is the very definition of a hot mess.

I got an iPad earlier this year. An Air 2. A somewhat frivolous purchase on my part, as I tend to make occasionally. It was to be used as an easier, lighter option to take notes and such during my classes and to watch TV and such where an actual TV couldn’t be found. It served this purpose very well for several months.

For note-taking, I have recently become addicted to online note management tools like Evernote, so I got a Wacom Bamboo Stylus Fineline pen to use with the iPad. the relationship between me, my iPad, and the pen became tempestuous, at best. The pen had to be charged frequently, the lack of a digitizer on the iPad made for shitty handwriting, and no app seemed to have palm rejection that worked in any way shape or form. The best app I came across was Noteshelf, which made the best of the capabilities of the pen and was super easy to use, so that would be the choice if you’re an iPad note taker.

So eventually the iPad wasn’t taking care of what I had coughed up a huge chunk of money for it to do. I started looking for a replacement while the resale value of the iPad was still somewhat high. The fact that the entry-level Surface 3 had a digitizer along with an optional pen had me intrigued, and the price was certainly right at much less than my iPad along with an educational discount. Luckily I have a Microsoft store near me, so the purchase was quick and easy. MS stores seem to be a lot more laid back than Apple stores, since they have demo stations that have lots of tools and such to play with and actually include chairs so you can sit and try things out. Major kudos to Microsoft on that.

I got the base model Surface 3, sans LTE, 16GB SSD and 2GB RAM. It runs on an Atom processor with the new Cherry Trail architecture. The storage may seem puny, but the Surface 3 includes a microSD card reader, so a quick trip to Amazon will resolve any space issues you may have. The screen is 1080p, and looks fantastic, although sometimes certain programs don’t scale too well and appear slightly blurry. It’s got the now prerequisite dual webcams as well. The type keyboard and the Microsoft pen were extra purchases. I can understand the pen being extra, but Microsoft should really bundle the keyboard. It’s stupid not to.

The keyboard – for being a thin snap-on cover – is excellent. Despite the keys being slightly scaled down to fit, they don’t feel too small. It’s very comfortable and buttons haven’t been moved to weird locations (looking at you, every Android tablet keyboard I’ve ever used) so my typing speed hasn’t been negatively affected at all.

The pen is what really makes the Surface an incredible device. Writing is accurate and pretty much perfectly replicates my handwriting as it would look on paper. Palm recognition isn’t perfect, but works much better than on my iPad apps.

And now for the knockout punch. The Surface 3 runs full-on Windows 10. It can run most all Windows programs within its strength. I’ve ended up using mine for fun, as well as hardcore work activities. The little Atom processor, which doesn’t even require a fan, encoded a 1.5 hour GoToWebinar recording to MP4 in about 30 minutes. Much better than I expected from a tablet running on a SoC. The only times I’ve had the Surface 3 struggle was with a lot of Firefox tabs open (which can even bring my “big hoss” work iMac to its knees) and if I have several programs open and running operations at once.

If the recently-released iPad Pro would have included OS X instead of iOS, the Surface would have actually had a reasonable contender from Apple. But it didn’t, so that’s the end of that. In terms of bang for your buck, the Surface line kicks ass in most regards.

It’s got a kickstand, too. 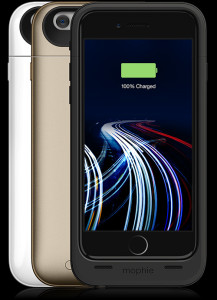 Friends, nerds, countrymen, I came to bury the Mophie Juice Pack Ultra, not to praise it.

Seriously, folks, this is a pretty embarrassingly bad iPhone case. At the princely sum of $150, I took the plunge into one of the strangest battery cases on the market for the iPhone 6. Even though their website said it was only for pre-order, but a case was promptly shipped anyway. Odd.

The case arrived quickly. I unboxed it to find an absolutely massive case with a glossy white finish. It looked cheap. Once applied to the iPhone 6, it was creaky as well as heavy. I then charged it and began it’s first test. The battery on this thing is incredible. It charges my iPhone from nothing to full and still has battery left over. That is, only if the case decides it wants to charge at all. The case randomly stops responding to pressing the status button of flipping the charge switch. Nothing happens. You have to plug the case in in order to get it to respond and charge your phone again. Bullshit. I paid $150 for a case, and I expect it to fucking work.

Luckily, an RMA number is in my hand and this case will go back home to Kalamazoo, Michigan. Good riddance.